A man has learned that his cat may truly have nine lives. He went ahead and buried a cat that he thought was his and hours later found him outside waiting to come in.

Nathan Sonoras is happy to have his pet cat Loki by his side once again, especially considering he believed he buried him just days ago.

“I don’t even know the right word, I’d say eerie to realize that he wasn’t dead the next day,” Sonoras stated. 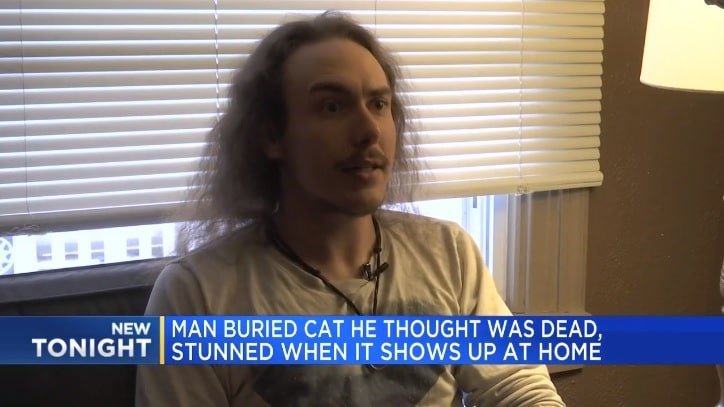 Just earlier this week Sonoras was driving home and saw a dead cat lying in the road. After taking a close look at the cat, he realized it was a black cat which was completely identical to his own.

He went on to say that the cat was missing patches of fur in the same spot and had a small kink in its tail.

“It matched, which was the scariest thing and is what hurt the most. So, after all that we had our ceremony, we said our prayers and goodbyes,” Sonoras explained.

Soronos went on to say that the next day when he woke up he saw Loki across the street from his house. He noted that he felt almost as if it was out of a movie, a pet cemetery horror film.

“I hear a little meow right behind me and there he is just staring at me in my parents’ driveway. Yeah, it was very, very terrifying. It was more scary than finding him dead in the road,” Soronos stated.

It turns out that Soronos had buried an entirely different cat and that the one he buried did not have on a collar.

“I think if anybody hits an animal on the road, whether it look like someone’s pet or just a random creature, you owe it to that animal to stop to see if it’s alive at least. It could be someone’s pet and if it’s someone’s pet that has family and that family is that pet’s entire world,” Soronos added.

After experiencing such an odd and unique incident, Soronos wants to remind pet owners that if they have a pet that roams the street, to get them a collar or micro-chipped.