This stray kitten was spotted just wandering around a neighborhood, she was desperately searching for food and shelter but no one wanted to take her in.

The scrawny 3-month old kitty was so famished that she would meow at anyone she came across. Desiree, who is a volunteer from Alley Cat Rescue, had been working on a TNR (trap-neuter-return) job in the area when someone informed her about the kitten. “She went from house to house, begging to go inside, but nobody would let her in. Some little kids had been feeding her bread.” “A resident told us about this skinny kitten that was looking for a home. Sure enough, we found her on a doorstep being shooed away,” stated Desiree. “She was so dirty, covered in fleas and had an upper respiratory infection. Despite all this, she purred like crazy and is super sweet.” Her tiny voice had become just a bit raspy from all the meowing but that didn’t stop her purring. That day, this poor sad almost starving kitty finally found what she had been searching for all thanks to Desiree and her amazing team. This furry finally had safe shelter, good food, and someone to cuddle with. They decided to name her Pistachio and quickly found her a place in a foster home. After a week of medical care, a warm bed, good food and loads of love, little Pistachio managed to gain her strength back and suddenly had plenty of energy. She was like a brand new kitten and became cuddlier than ever. 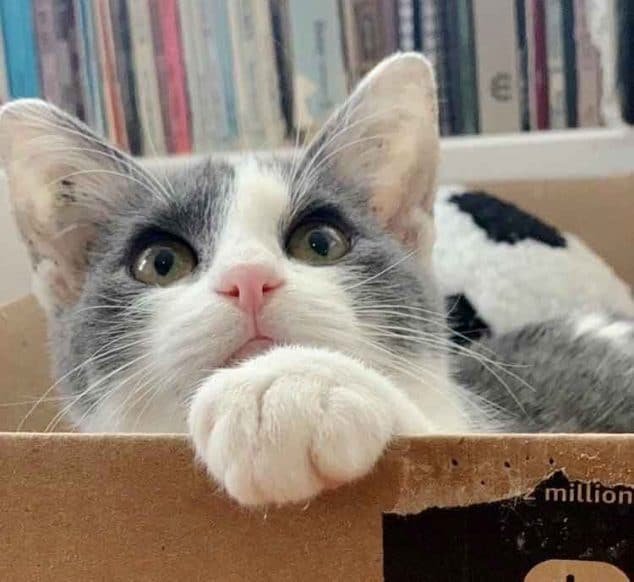 They decided it was high time to introduce Pistachio to ButterBean, who was an orphaned kitten, just so she could have a companion to cuddle with. She instantly took him under her wing and began grooming him just like any real big sister would.

Be sure to watch the inspiring video just below!