We’re all different, and it’s the same in the animal world. Differences should not be the reason for rejection. For example, the beautiful kitten you can see on the pics below has mesmerizing eyes, but that’s also the main reason why many have rejected to adopt it. But, some people don’t care about differences, just like 28-year old Evgenii Petrov. He was impressed by the cat’s beautiful eyes. A Scottish Fold that was abandoned by his previous owners, it had a lot of problems finding a new home until Evgenii came by. He says that he was enchanted by the cat the moment he saw a picture. “I didn’t believe he was real, and if his owner didn’t want him, I was willing to take him home”, Evgenii said. It was the best decision ever. The curious and kind cat loves nothing more than to cuddle with his friend all day long. It suffers from heterochromia, a condition that does the cat no harm. It looks different for sure, but other than that, it doesn’t affect his quality of life. 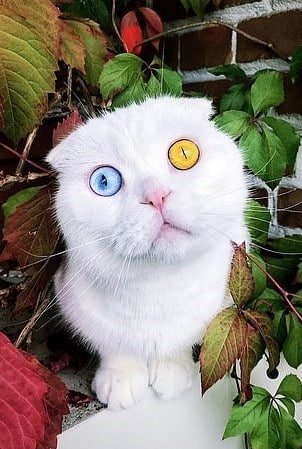 The kitten doesn’t know anything about its condition, of course, and acts just like any other cat every day. It’s stunning, don’t you think? Take a look at the video below to see how a day in his paws feels like: