JAPAN – In Takahashi, Okayama Prefecture, a feline “lord” of Bitchu Matsuyama Castle is currently drawing many visitors. That sure is a welcomed relief, following a heavy hit from natural disasters last summer. Sanjuro, who is a brown and white male cat thought to be 3 or 4 years old, is the cat lord of the popular castle, nicknamed “castle in the sky.”

He settled in the precincts of the castle in the wake of the torrential rains last July. Sanjuro’s love for people has generated social media attention, which in turn has increased the number of tourists coming to visit the castle. Attendance fell drastically after the rains but has been recovering rapidly thanks to the friendly cat. 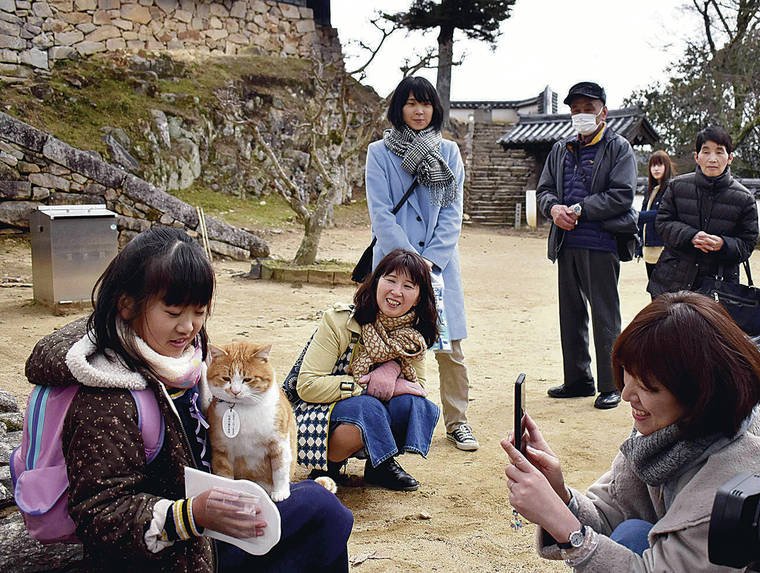 The fact is, Sanjuro is now referred to as a living “beckoning cat,” the auspicious cat statue often displayed in stores and other businesses.

“We want to liven up the whole city with Sanjuro,” stated one upbeat official with the Takahashi City Tourist Association.

“I thought he was an abandoned cat because he was very skinny,” he remembered.

After watching the cat for some days, Motohara started feeding him. From that point on, Sanjuro then began appearing in the main area of the castle, mingling with tourists. The cat didn’t mind people touching him at all and even purred. He quickly became widely known through word-of-mouth and online. The tourist association decided to name him Sanjuro in tribute to Tani Sanjuro, who was a samurai warrior of the Bitchu Matsuyama clan. Sanjuro actually served as a troop captain of Shinsengumi, a samurai squad in the last years of the Edo period (1603-1867).

As media coverage of Sanjuro grew, his owner was eventually found in October. Megumi Nanba, who is 40, who lives in the city, said she had been searching for her cat, who ran away on July 14. Nanba initially intended to take the beloved pet back home, however, her family discussed the matter and decided to give their cat to the tourist association.

“I was really relieved when I found out he was alive. If he likes living in the castle, it is good for him (to stay there),” she stated.

In November, an association official took Sanjuro home to groom him for a media presentation, however, he ran away again. For more than two weeks, the association tried in vain to find him. Finally, a whole 19 days later, Sanjuro reappeared. Since that time, officials have kept him inside the castle’s administrative office building. This past December, the association officially appointed Sanjuro to the post of “castle lord cat.” His duty: to stroll around in the castle twice daily, with officials holding him on a leash. 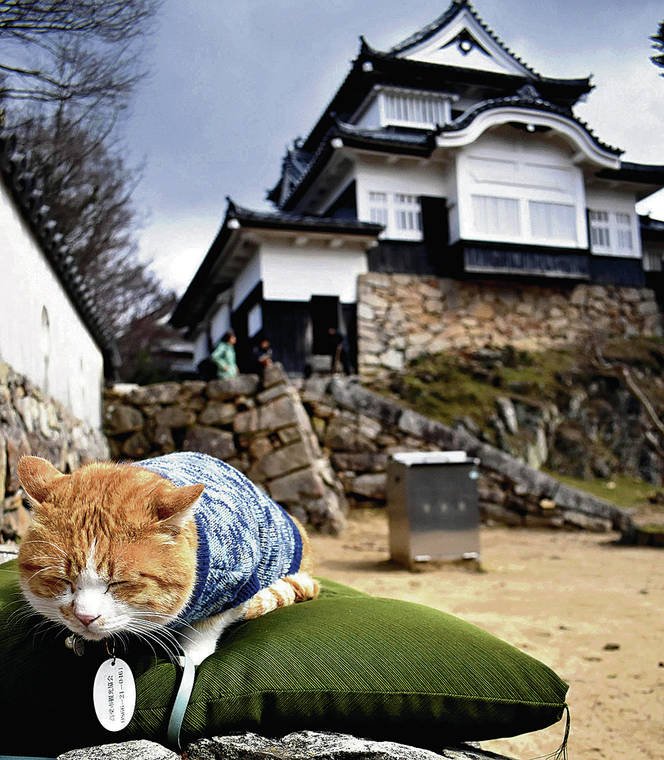 Sanjuro is extremely popular for his displays of affection towards visitors, such as rubbing against people’s legs and neatly sitting down on their knees. Following July’s torrential rains, visitor counts had fallen about 0%, but in February numbers surpassed 4,000, 40% higher than those of the previous year.

The association has designated March 16 as the “Day of Sanjuro,” using a play on words — 3 (san), 10 (ju) and 6 (roku) — and held a special event. Tourists from across the nation then swarmed to see Sanjuro that day. Miho Hatanaka from Otake, Hiroshima Prefecture, was visiting with her daughter.

“He is so friendly and tame. I wish I could hug him a long time,” she stated.

Her daughter Nanami, who is 9, echoed her sentiment: “He’s so cute. I hope he keeps playing the role of castle lord.”

The association has actually produced official Sanjuro items bearing his photo, such as key chains and postcards, as well as digital stamps that can be used on LINE, which is a free communication app. Hideo Aihara, who is the manager of the tourist association, said the group hopes to build on the cat’s popularity.

“With Sanjuro at the core… we want to expand this positive trend,” he concluded.