Have you ever seen cats falling down like rain in the sky? It’s all fantasy, of course, but one bookstore has such a specific problem with a group of cats roaming wild on walkways above it. A video of the cats walking above customers’ heads in the Cupboard Maker Books store was recently posted on TikTok. It went viral right away, of course, as soon as the store’s owner Jason Haring posted it on his profile. 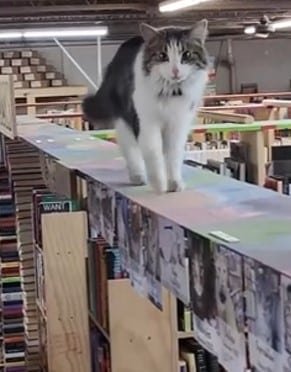 The three cats, Zak, Annika, and Mouse, are living above the store and walking on custom-made pathways. They don’t really fall off the ceiling, but to make things interesting, Jason has posted a sign that says “Beware! Falling Cats!”. Everyone looks up when they see it, and to their delight, they see cats roaming the walkways like they don’t care. 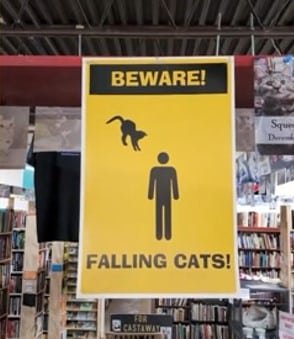 Jason says that the cats love playing up there, and they sometimes ‘invite’ guests. There can be as many as five felines at any time in the store, as they foster cats alongside the permanent residents. People are often curious how they can keep their pets and still foster others while running a successful business. He says that they’re only a foster home, so as soon as a cat is ready to move on to a permanent home, they’re open for another. 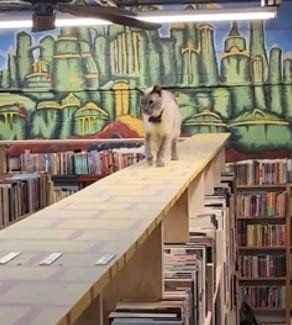 It goes without saying that the cats have made the book store even more popular, and we love the fact that Jason and his wife love cats so much. If only other store owners were as cool as them.