This cat hasn’t been nicknamed Greedy Cat for no reason. It was caught stealing baked beans and cereal a number of times and it was Coco Pops stuck to his face that “sold” the thief to his owner.

Bea Ettlinger, China’s owner, couldn’t believe what he was seeing when he saw the thief in “action”. The long fur is essentially what gave the cat away. Every time he stole food from the kitchen, bits of Coco Pops would stick to it, giving away his crimes. 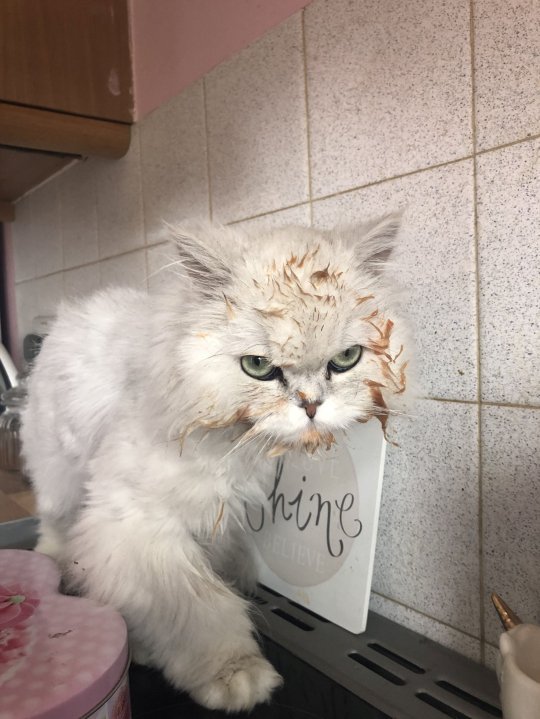 Of course, as soon as Greedy Cat’s thieving adventures were posted online, they became an instant hit. The 18-month old thief became an internet sensation overnight and he doesn’t really seem amused by it. China is a Chinchilla Persian whose pics were liked by nearly 10,000 people on social network sites. Every time Bea posts pics of China’s face covered in baked beans sauce, thousands of people like and comment on them. Bea says that China’s a funny boy who does stupid things, but he never did something like this. He is greedy, though, and tries to get into the cupboard any time he can. It all started when the cat walked nonchalantly past Bea and his mom in the kitchen with bits of food stuck on his long fur. 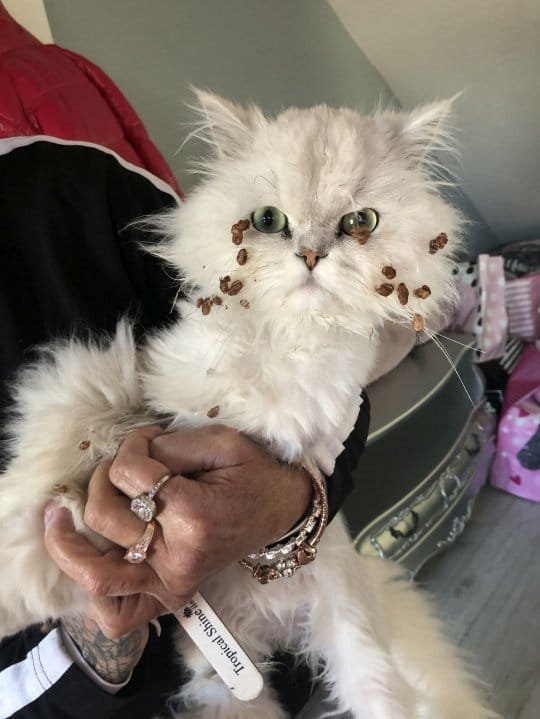 Bea and his mom were laughing so hard. Even funnier, Bea’s mom refused to remove the bits of food from the cat’s fur. “It looked funny so she decided to just leave them there,” Bea says with a smile.

China, as it turns out, wasn’t distressed by the food in his fur. He looked grumpy after he realized what he did. All those Coco Pops stuck to his fur when he tried to eat them from the can and it painted a hilarious picture.

A Tale of Greed

China always looks grumpy when he’s caught thieving. According to Bea, though, he can’t seem to stop his mischievous adventures. China’s owner says that the cat is mysteriously obsessed with pulling out rubbish from containers and boxes. He regularly pulls out rubbish from one of Bea’s carrier bags, and it’s all just because he’s greedy.

The moodiness and greedy character don’t stop Bea from adoring the cat. As his owner says, China is worth all the trouble. We may have lost Grumpy Cat (RIP) recently, but the world will soon be treated to the adventures of Greedy Cat.