A woman from Lethbridge is looking for her lost cat Neville after receiving a letter from her neighbor complaining about the cat a day earlier. Stephanie May just moved into her new Lethbridge home with her cat this year in April. A week after, she received her first letter in the mailbox, but it wasn’t the heartfelt welcome letter she was hoping for.

The letter was sent by her neighbor who complained about Stephanie’s cat. In the simplest terms, the neighbor complained that if the cat becomes a problem, it’ll be removed. That was on Tuesday night the week after moving in. On Wednesday, Neville went missing.

Stephanie’s neighbor admitted to writing the letter. However, she said that she didn’t do anything more. She did not touch the cat, although that wasn’t enough for Stephanie to suspect foul play. The city of Lethbridge allows cat trapping when needed, and says that cat owners must be respectful of others in their neighborhood. It’s clear that the residents are not very tolerant of cats wandering in their yards. As Stephanie’s neighbor Lana said, she’d prefer if Stephanie kept Neville inside. 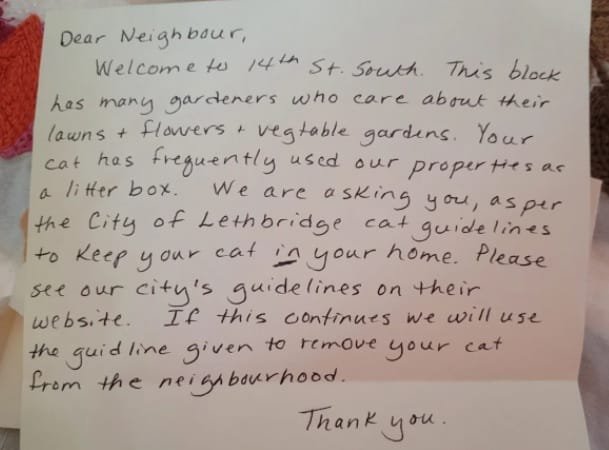 So far, Stephanie hopes to find Neville soon. She considers him a part of the family and has asked anyone who may have information to come forward so she can take Neville back home.