We all know that a dog is a man’s best friends, but to be honest, cats are pretty great buddies too. They were worshipped since ancient Egypt, so the little furballs have a long history behind. Cats were popular way before dogs and apparently formed a mutual relationship with humans over 8,000 years ago.

A recent study showed that wild and domestic cats have nearly the same genes. They are only different in their tabby coat markings. The marking supposedly started on domesticated cats in the Middle Ages, with the gene for tabby coats dating as far back as the Ottoman Empire. Tabby coat markings became dominant during the XVIII century, with new cat breeds popping up in the XIX.

Below you can see the 20 most popular cat breeds and their origins. They all come with different coats and any self-proclaimed fan should know these facts about them.

#1 The Siberian is a centuries-old landrace of domestic cat in Russia and recently developed as a formal breed with standards promulgated the world over since the late 1980s. Siberians vary from medium to large in size. 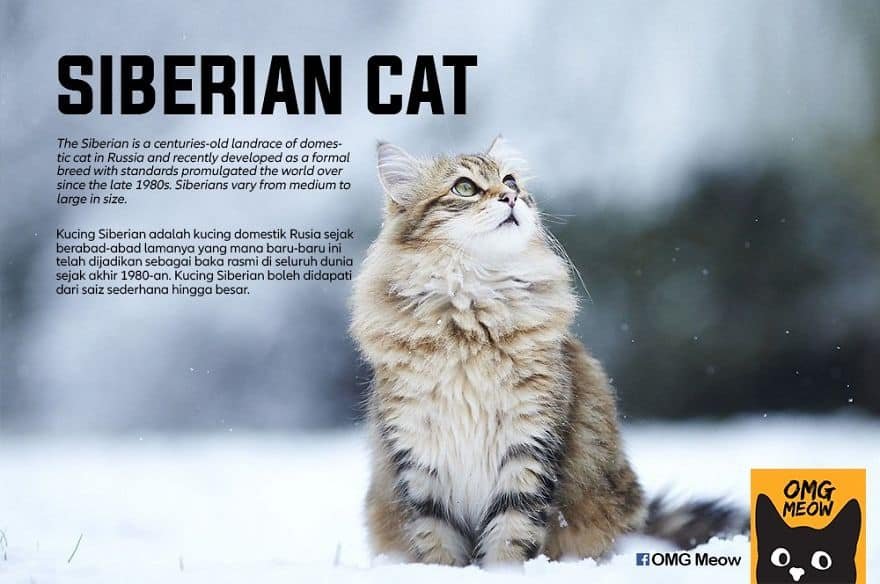 #2 The Ragdoll is a cat breed with a color paint coat and blue eyes. They are large and muscular semi-longhair cats with a soft and silky coat. Developed by American breeder Ann Baker in the 1960s, they are best known for their docile and placid temperament and affectionate nature. 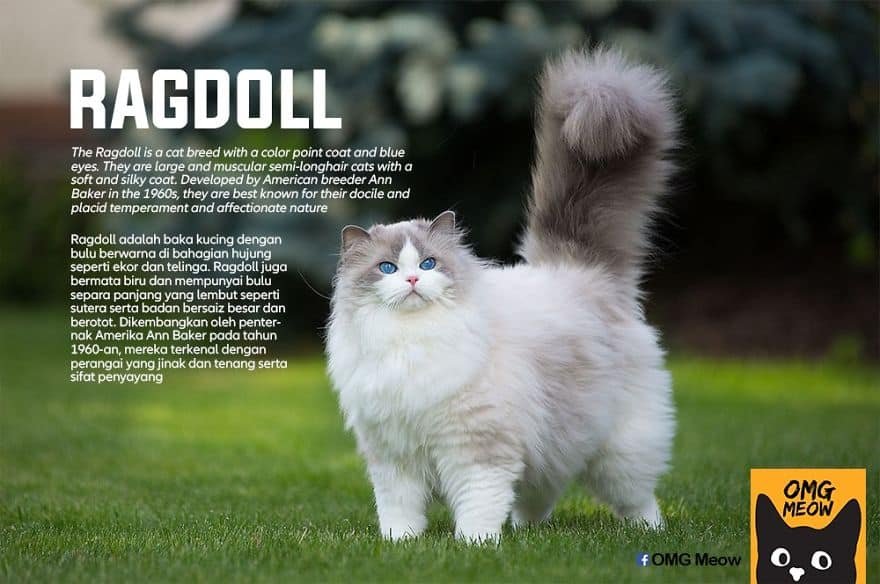 #3 The Norwegian Forest cat is a breed of domestic cat originating in Northern Europe. This natural breed is adapted to a very cold climate, with a top coat of glossy, long, water-shedding hairs and a woolly undercoat for insulation. 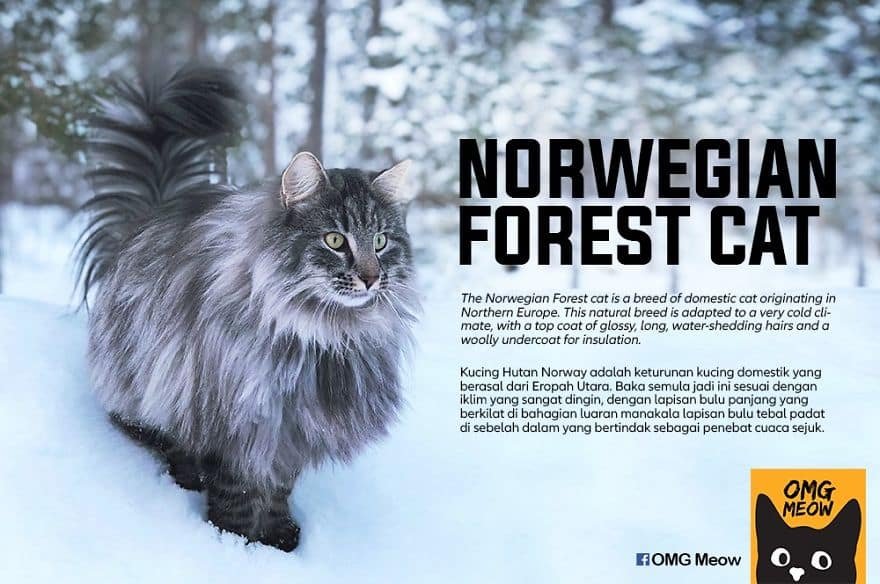 #4 The Bombay cat is a type of short-haired cat developed by breeding sable Burmese and black American Shorthair cats, to produce a cat of mostly Burmese type, but with a sleek, panther-like black cat. Bombay is the name given to black cats of the Asian group. 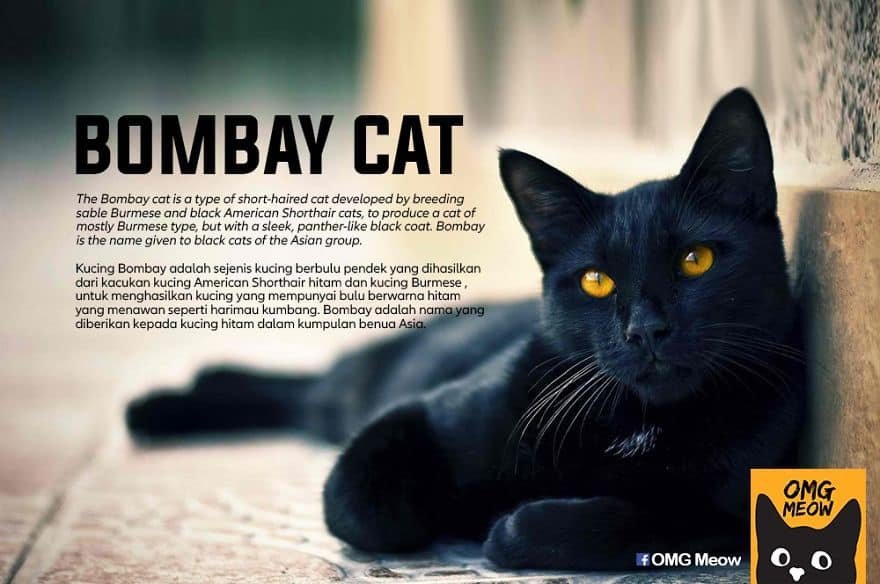 #5 The Bengal cat is a domesticated cat breed created from hybrids of domestic cats, the Asian leopard cat and the Egyptian Mau, which gives them their golden shimmer – the breed name comes from the taxonomic name. Bengals have a wild appearance and may show spots, rosettes, arrowhead markings, or marbling. 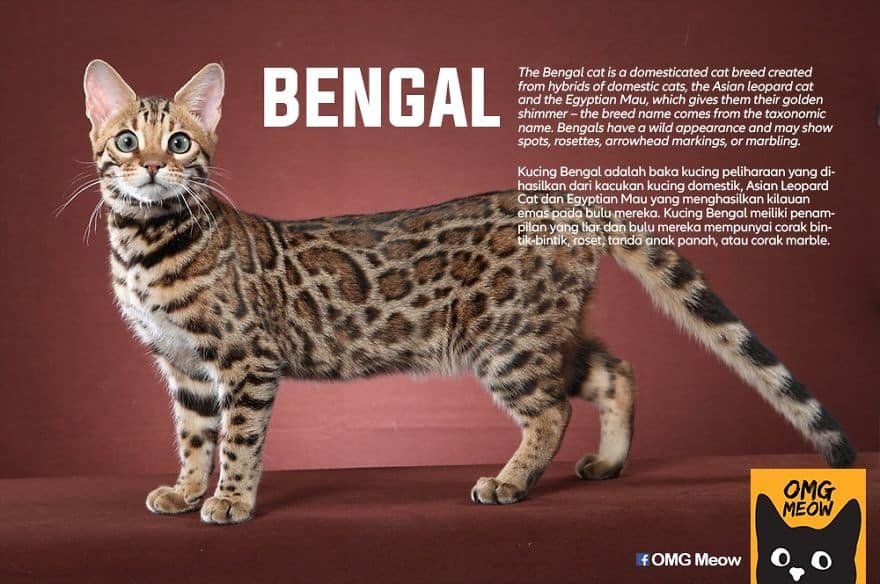 #6 The Russian Blue is a cat breed that comes in colors varying from a light shimmering silver to a darker, slate grey. Their short, dense coat has been the hallmark of the Russian breed for more than a century. The dense coat stands out from the body. 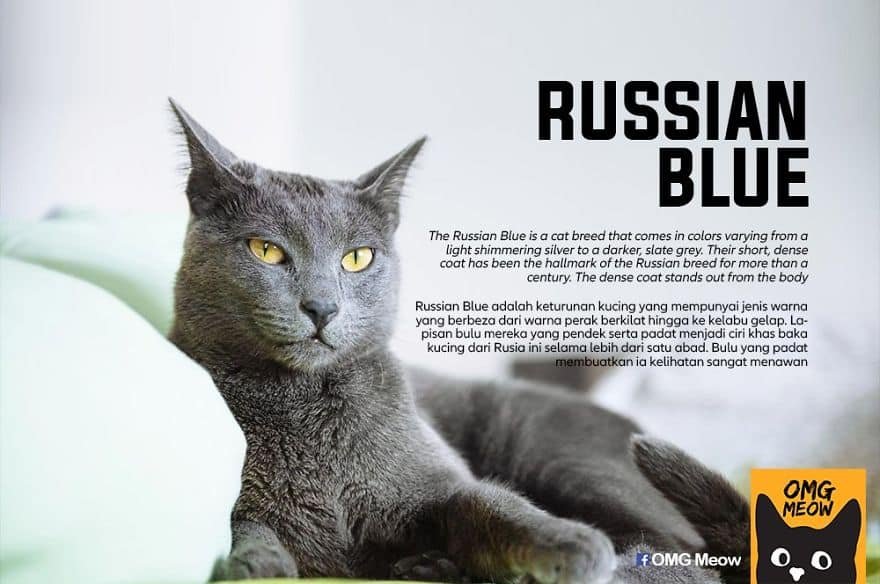 #7 The Himalayan, is a breed or sub-breed of long-haired cat similar in type to the Persian, with the exception of its blue eyes and its paint coloration, which were derived from crossing the Persian with the Siamese. 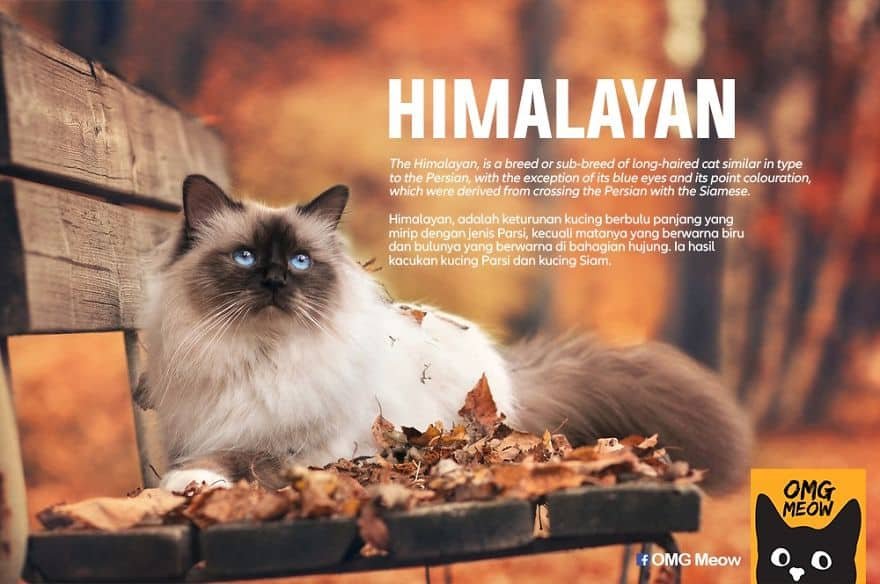 #8 The British Longhair is a medium-sized, semi-long-haired breed of domestic cat, originating in Great Britain. 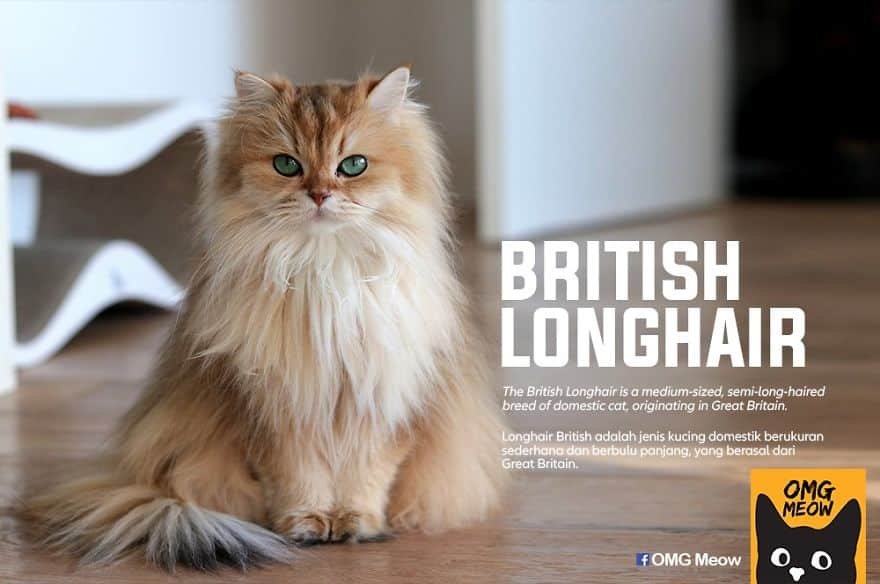 #9 The Maine Coon is the largest domesticated cat breed. It has a distinctive physical appearance and valuable hunting skills. It is one of the oldest natural breeds in North America, specifically native to the state of Maine, where it is the official state cat. 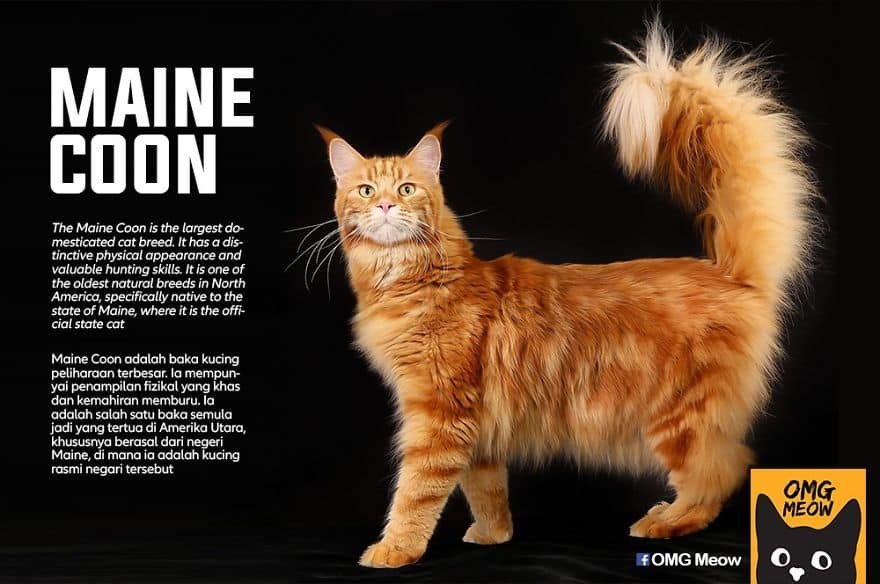 #10 The Siamese cat is one of the first distinctly-recognized breeds of Asian cat. Derived from the Wichianmat, one of several varieties of cat native to China and brought to Thailand, the original Siamese became one of the most popular breeds in Europe and North America in the 19th century. 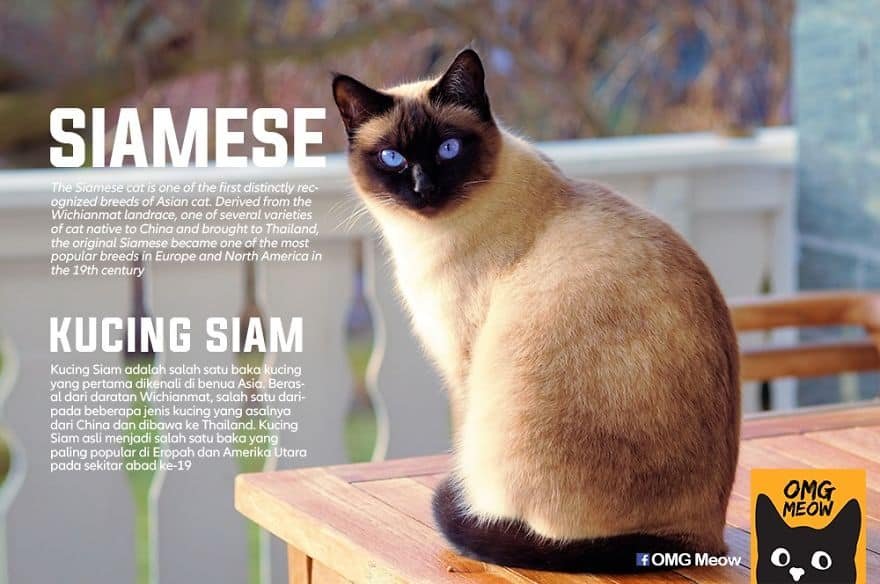 #11 The Turkish Angora is a breed of a domestic cat. Turkish Angoras are one of the ancient, natural breeds of cat, having originated in central Turkey, in the Ankara region. The breed has been documented as early as the 17th century and is believed to the origin of the mutations for both the color white and long hair. 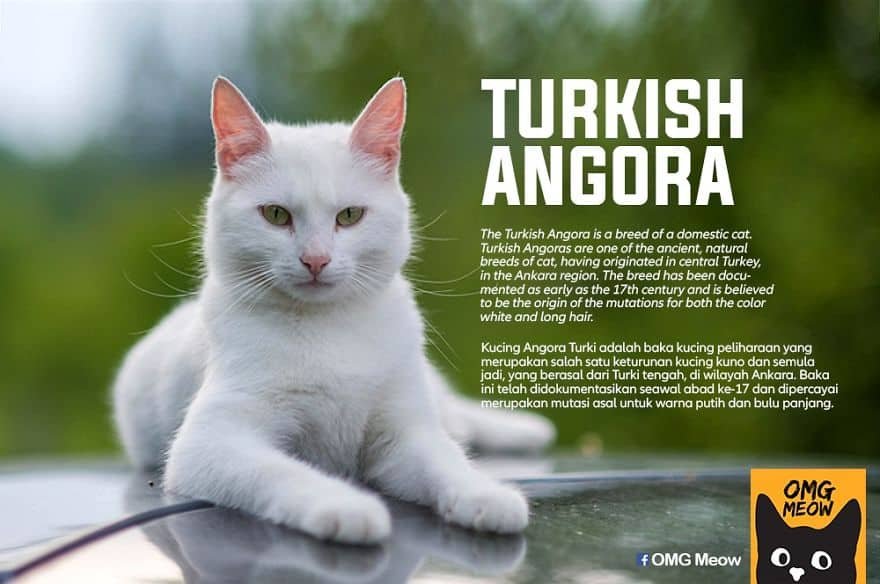 #12 The Birman, also called the ‘Sacred Cat of Burma,’ is a domestic cat breed. The Birman is a long-haired, color-pointed cat distinguished by a silky coat, deep blue eyes and contrasting white ‘gloves’ or ‘socks’ on each paw. The breed name is derived from Birmanie, the French form of Burma. 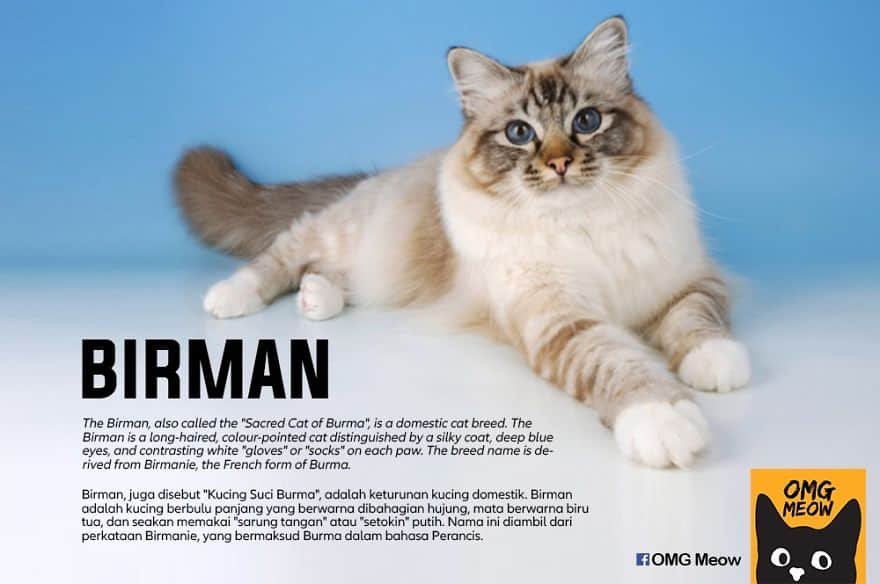 #13 The Somali cat is often described as a long-haired African cat; a product of a recessive gene in Abyssinian cats, though how the gene was introduced into the Abyssinian gene pool is unknown. It is believed that they originated from Somalia, long lost cousin of the Abyssinian cat; which has origins in Ethiopia. 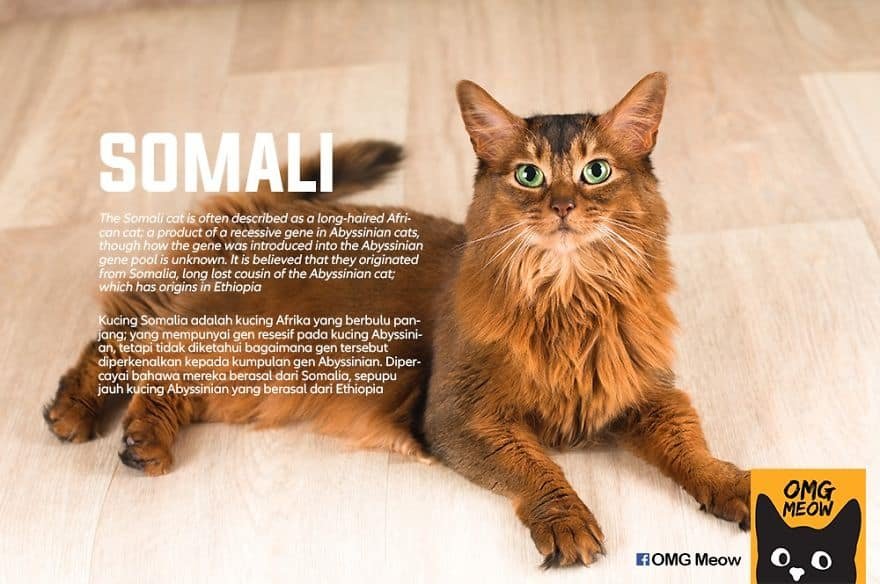 #14 Egyptian Maus are a small- to medium-sized short-haired cat breed. They are one of the few naturally spotted breeds of domesticated cat. The spots of Mau occur on only the tips of the hairs of its coat. It is considered a rare breed. 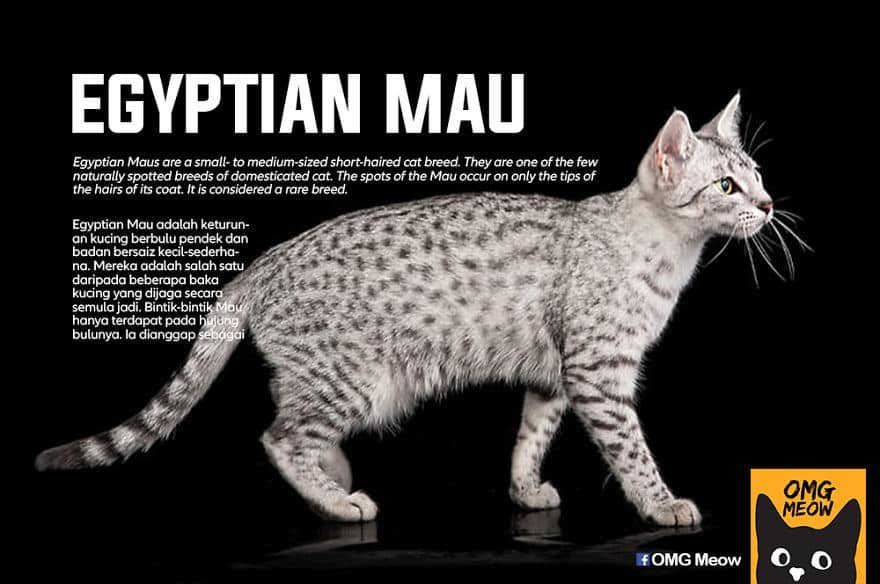 #15 The British Shorthair is the pedigreed version of the traditional British domestic cat, with a distinctively stocky body, dense coat, and broad face. The most familiar color variant is the ‘British Blue,’ a solid grey-blue coat, copper eyes, and a medium-sized tail. 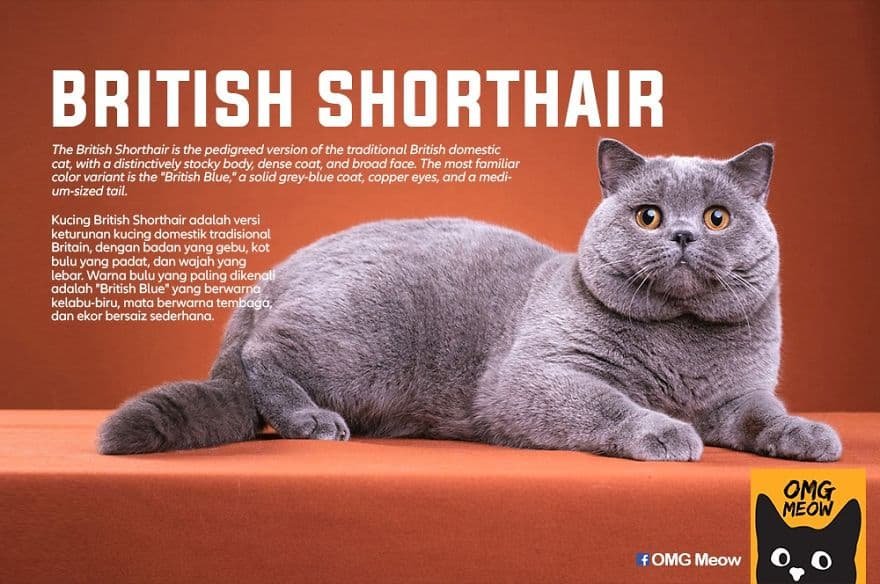 #16 The American Shorthair is a breed of domestic cat believed to be descended from European cats brought to North America by early settlers to protect valuable cargo from mice and rats. According to the Cat Fanciers’ Association, in 2012, it was the seventh most popular pedigreed cat in the United States. 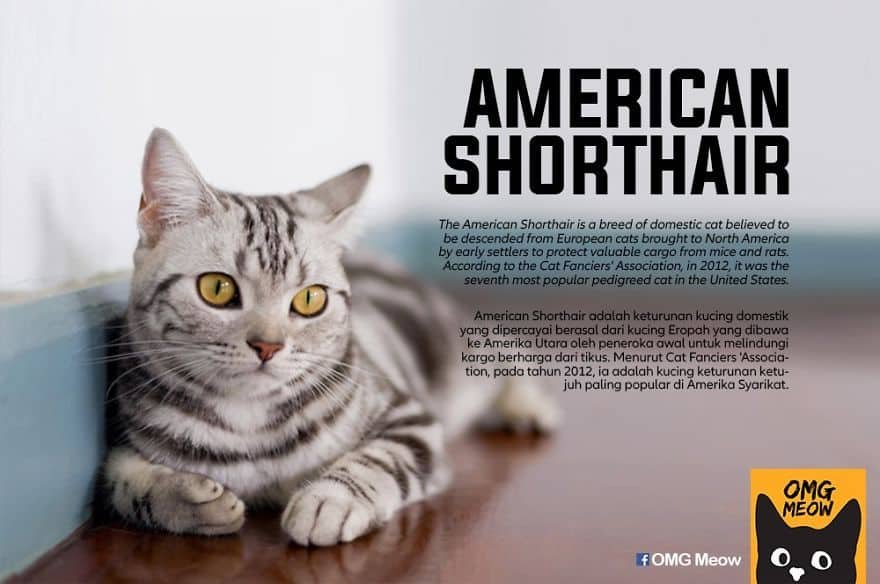 #17 The Scottish Fold is a breed of domestic cat with a natural dominant-gene mutation that affects cartilage throughout the body, causing the ears to ‘fold,’ bending forward and down towards the front of the head, which gives the cat what is often described as an ‘owl-like’ appearance. 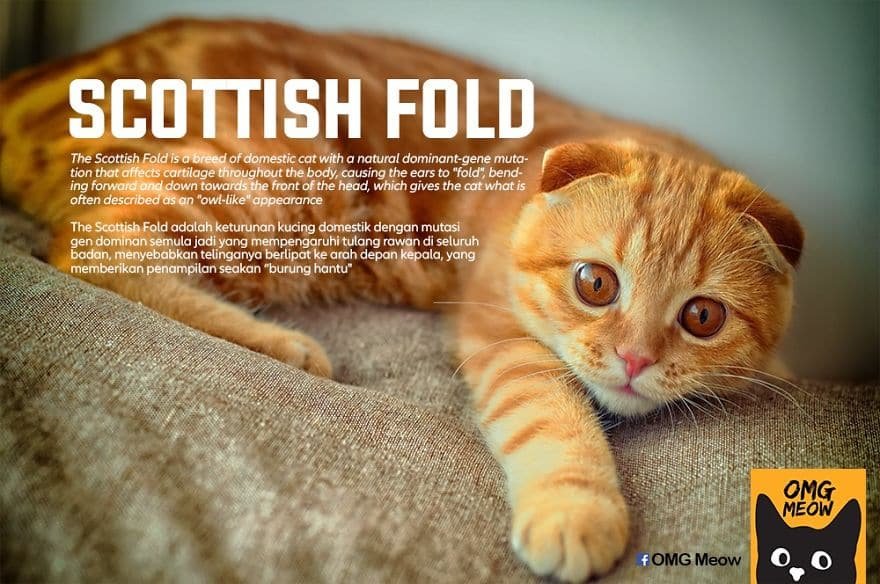 #18 The Singapura is one of the smallest breeds of cats, noted for its large eyes and ears, brown ticked coat, and blunt tail. 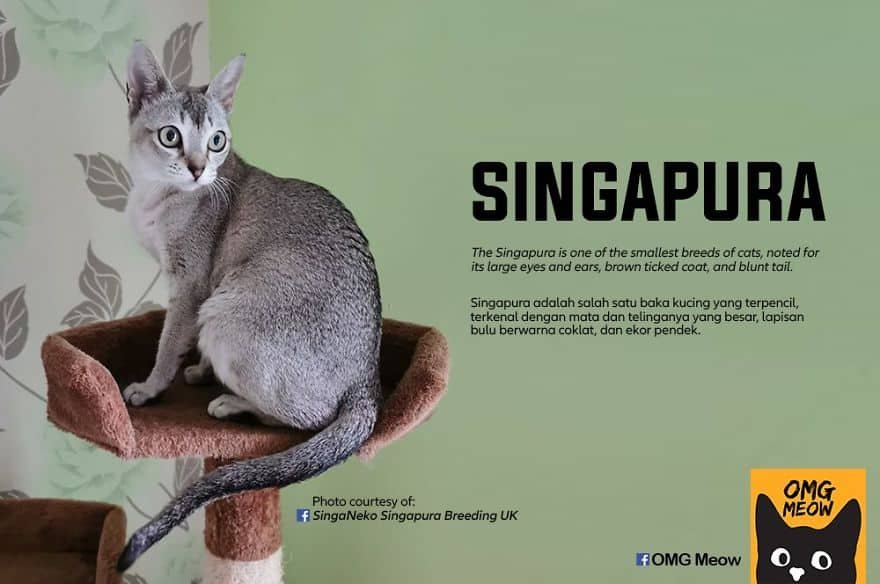 #19 The Abyssinian is a breed of domestic short-haired cat with a distinctive ‘ticked’ tabby coat, in which individual hairs are banded with different colors. In nomenclature terms, they are also known as simply Abys. The breed is named for Abyssinia where it is believed to have originated. 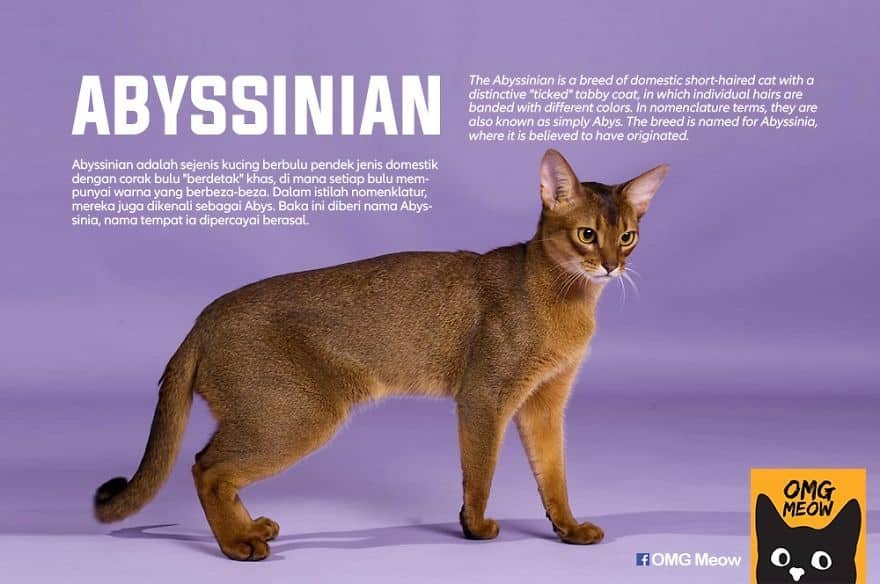 #20 The Balinese is a long-haired breed of domestic cat with Siamese-style point coloration and sapphire-blue eyes. 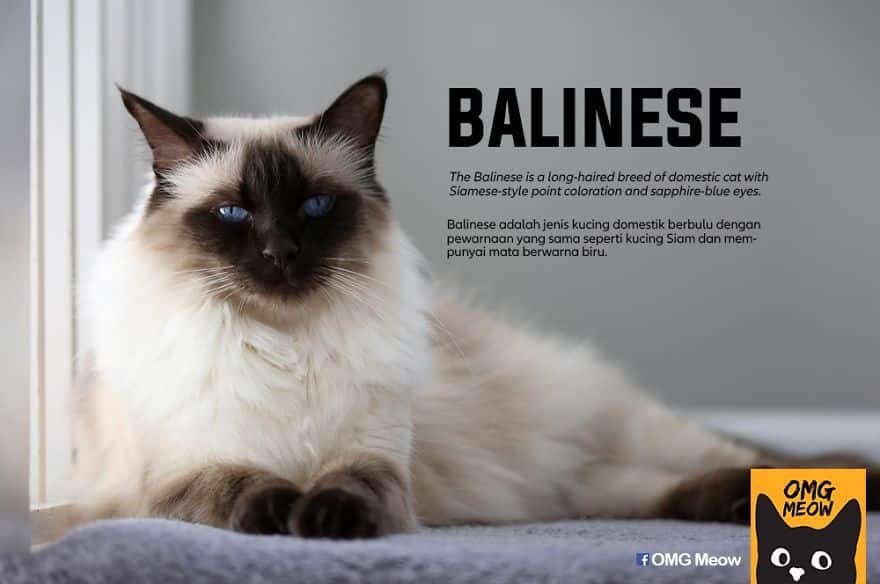