In a country where cats  can actually  have ID cards of their own and there are real estate agencies solely dedicated to finding them comfortable homes, Japan seems to be every cat’s dream place.

And now – the endless pursuit of satisfying the whim of the world’s kitties has reached a whole new plateau as Unicharm — one of the country’s leading makers of masks and sanitary products and diapers — has just unleashed a product which is being billed as a Japan-first: diapers for cats. 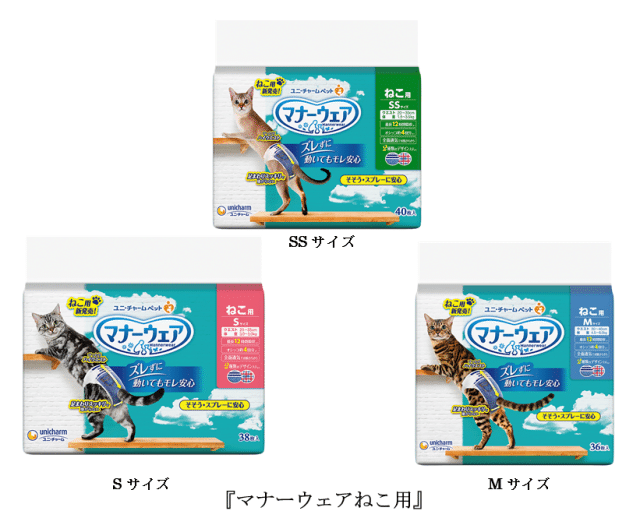 In what’s bring described as “absorption wear”, these new diapers are designed to solve a cat’s excretion problems. They were created after carefully studying the body shape and movement of cats.

According to a research study, which was conducted by Unicharm, approximately 2.24 million cats are indoor pets in Japan, and a recent survey has shown that a great number of pet owners encounter problems related to cats ‘spraying’ around the house – but not in the litterbox.

Many cat owners they have spoken with said they have needed to place pet sheets or old flyers on the floor – or sometimes even plastic bottles around places where excretion troubles usually occurred.

Some cat owners have actually reported used diapers designed for dogs on their cats  — but as the body type and posture between the two animals are somewhat different, there were certain problems involving leaks and gaps.

In response to these unique issues, Unicharm then decided to launch a brand new absorption garment especially for kitties, calling it “Manner Wear” for cats.

These new diapers explained to have a high waist, which fits quite snugly at the very right spot for cats’ long bodies, which allowes then to jump and move flexibly without the special garment falling off. The wide tape is extremely hard to peel off, even if the cat tries to groom and lick around the tape. In addition, the adjustable tail-hole may be widened to fit even the fluffiest of tails very comfortably while holding moisture in.

Each and ever diaper is explained to absorb moisture for up to 12 hours whole hours, although the amount of cat’s pee certainly varies on a case to case basis, and the absorbent, breathable sheet inside is made with ultra-fine silk-like fibres which are soft for kitty’s fur.

Though the prices of each remains unspecified, the new Manner Wear for Cats will actually be available at stores nationwide beginning on 9 March.

What will they think of next?